It has been proposed that one of the traits that are involved in the origin of sociality is the tolerance among individuals belonging to the same species. This means that the transition from solitary to social life requires the regulation of aggressiveness and the evolution of intraspecific recognition. This is also known as kin recognition, now, when we look at the ideas to explain the origin and maintenance of this trait, there are some contrasting approaches.

The sociobiological school, propose that individuals bearing the same genes may be able to recognize themselves, this correspond to an evolutionary adaptation that allow them to collaborate and keep cohesion of related group of individual. This idea has flourished in the field of behavioral ecology and the mainstream neodarwinian culture, it has been suggested even to explain altruism in humans. However, despite the benefits suggested on the theoretical models for a genetic kin selection, these proposals are often not supported with explanatory mechanism for the occurrence of such kin recognition.

Alternatively to this approach, it have been suggested that the recognition and acceptance of individuals belonging to a defined group correspond to an emergent property due to behavioral development, where the signals present during the construction of the kin fidelity responses are molded by the available cues, these cues can originated either in the group (kin reference) or even derive from the organism itself that is developing its responses (self reference).

One suitable system to study the jump from solitary to social life and the origin and maintenance of intraspecific recognition is constituted by the Xylocopinae (Hymenoptera: Apidae). This group is held as the sister group for all other Apidae subfamilies, and thus it may very likely be the less derived. In addition it contains species that goes from solitary to social life in relation to nesting behavior. Among the solitary species some exhibit features more often present in social species, some of these are related to parental care, contact between related individuals and also tolerance between nestmates. Manueli apostica is one of these solitary bees, it belong to the monogenerial tribe Manuelini inside Xylocopine, a group mainly presented on continental Chile. In these bees, female construct nests inside the dead stem of Chusquea quila (Poaceae: Bambuseae), in these developing offspring are isolated by the mother in single compartments together with food supplies (Figure 1).

In this group, Dr. Luis Flores-Prado and collaborators from Facultad de Ciencias, Universidad de Chile,  have found that the recognition of nestmates individuals and tolerance is either developed from cues present on food masses and nest material provided by the mother or on cues acquired by the insect themselves, also known as self referencing (Experiment 1, Figure 2). In a newly published research Dr Flores-Prado and co. performed a recognition test between two non-kin individuals (a foster and a non manipulated one, Experiment 2, comparison A) developed in the same nest, thus they will experience the same breeding environment.

Furthermore, they compared between two kin females developed in different nest, which were not used as sources of other test (Experiment 2, comparison B). So, this means same kin different environment.

These transplant design allow them to disentangle if kin recognition is achieved due to the cues from food provisioning or from cues that the bee obtain from itself. These experiments demonstrated that non-kin females developed in the same nest were more intolerant (and less tolerant) with each other than kin females developed in different nests (Figure 3). Thus, kin recognition was occurring. Individuals of M. postica are physically isolated while developing up to the adult stage prior to the destruction of cell partitions, and there is no direct contact between them and their mother after oviposition. In addition, non-volatile compounds (such as cuticular hydrocarbons) mediate nesmate recognition in this specie (at has been demonstrated by Dr. Flores-Prado). Based on these evidences the authors suggest that cues used in this “kin” recognition do not correspond to an especially unique kin cues and that kin recognition in this bee specie has occurred through self-referent phenotype matching. Just in the same way chicken embryos are able to develop its how-to-peek on a spot behavior due to the cues derived from the movements of their own organs inside the egg, one of the many amazing examples of behavioral developments discovered by Z.Y. Kuo in the beginning of the XX century. 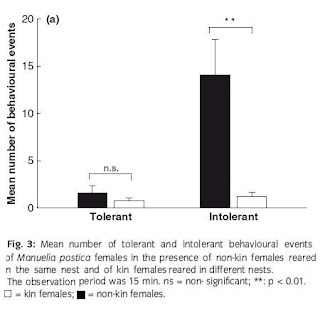 I don't get it, that experiment just shows its not getting cues from the nest. It does not tell us anything about the mechanism of kin recognition. Self-recognition is a hypothesis, but it is not being tested by that experiment.

As it is, I think a hamiltonian could perfectly love this

MMm, i may have to extend the explanation, cos the missing link is that earlier experiments already demonstrated that the recognition is due to cuticular hydrocarbons.

when you have the isolated imago, they experience its own cuticular cues then it recognize kin due to that--

anyway hopefully we will have the author to explain those details...

Nice blog work. I came across your blog while “blog surfing” using the Next Blog button on the blue Nav Bar located at the top of my blogger.com site. I frequently just travel around looking for other blogs which exist on the Internet, and the various, creative ways in which people express themselves. Thanks for sharing.

Weaken a unique part of the body and rehearse syndication keeps on that position for the earn. Following your match, Joe Benoit isn also pleased regarding becoming marked a traitor. They lets you know to adhere to the path associated with platinum...will which means that among the champs is the traitor? Binge-eating syndrome is really a typical draw group match with you and Kane in opposition to Randy Orton as well as Frank Benoit. Label Kane throughout and invite the top person to keep up company as you aid contrary to the lawful along with non-legal man. Assist Kane in the event that he becoming pinned and, in the event that youe your lawful person, call for support!Youe then provided for the No Solution Smackdown pay-per-view to gather more info in connection with traitor.