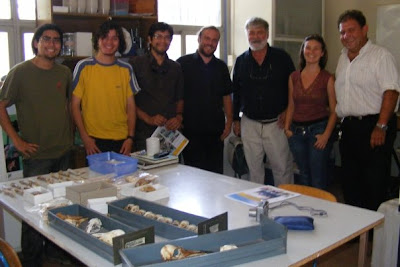 In 1999 I published an article in the (cryptic) monthly news bulletin of the Museum of Natural History of Chile, entitled "Evolution of Arm Size in Theropod Dinosaurs: A Developmental Hypothesis". In this work, which I did as an undergrad, I tackled what seemed a consistent trend among species of theropod dinosaurs, the presence of proportionally smaller arm sizes in species with larger body size. Femur size correlates quite directly with body size in dinosaurs: I therefore took femur size as an indicator of body size and making a linear regression I obtained that Humerus = 0,387 (Femur)^0,6807, with a rather nice determination coefficient, R^2 = 0,89. It is, of course, very remarkable that this negative allometry would so nicely predict theropod humerus size. Rather than the usual adaptive explanations, I presented a developmental hypothesis: The ontogeny of the most recent common ancestor of the theropods presented slower growth of the arm than of the leg, with arms that were proportionally larger earlier in ontogeny, at smaller body sizes. Thereafter, evolutionary variation of different body sizes in different species descended from this ancestor simply reflected conservation of this ontogenetic trait, with smaller- or larger-looking arms as a consequence of body-size variation, rather than any process of "local" adaptation. In this context, the very bird-like dromaeosaurid dinosaurs would owe their proportionally large arms to their small body size. If this were indeed correct, if a dromaeosaurid species would evolve a larger body size, we would expect it to show short arms, unlike those of its small-sized, long-armed ancestors.
The recent discovery of the dromaeosaurid Austroraptor is just that: a pretty large dromaeosaurid, with proportionally small arms, despite being descended from long-armed, smaller ancestors. 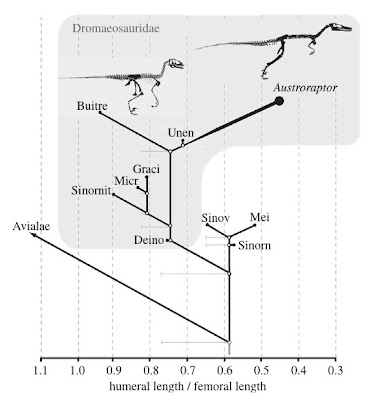 So, how does the Vargas formula work for Austroraptor? The femur length of Austroraptor is 0,56 M, so the predicted humerus length is 0,261 M. The actual length of Austroraptor's humerus is 0, 262 M... not bad, hehehe.
Of course, my hypothesis has another more direct and straight-forward prediction: Within an ontogenic sequence of a theropod species, younger, smaller specimens should present proportionally larger arms than older, larger specimens. Unfortunately, I still don't know of any conclusive evidence for this in a non-avian theropod. However, this is known to have been the case for Prosauropod dinosaurs, the inmediate outgroup of theropods, which presented larger arm porportions at earlier stages of ontogeny. Furthermore, according to Middleton and Gatesy, there is preliminary data that forelimb size decreases in the gull Larus californicus form 43% in hatchlings to 38% in adults...suggesting, by phylogenetic "sandwich", that the same was true for non-avian theropods. I thus renew the validity of my prediction!
Vargas A 1999 Evolution of Arm Size in Theropod Dinosaurs: A Developmental Hypothesis. Noticiario Mensual del Museo Nacional de Historia Natural de Chile 338: 16-19
Novas, F. E., Pol, D., Canale, J. I., Profiri, J. D., Calvo, Jorge O., 2008. A bizarre Cretaceous theropod dinosaur from Patagonia and the evolution of Gondwanan dromaeosaurids. Proceedings of the Royal Society B.
Publicadas por A. Vargas a la/s 12:16 a. m. 12 comentarios: